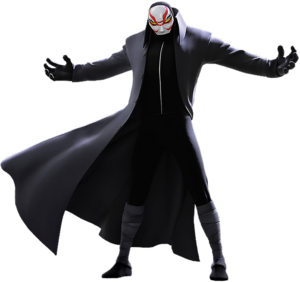 I want my daughter back.

Professor Robert Callaghan, or also better known by his supervillain name Yokai, is the main antagonist of Disney's 54th full-length animated feature film Big Hero 6, and a minor character in Big Hero 6: The Series. He is a former university teacher presumed dead in a fire; until he later re-emerged using a vast army of microbots in his plan to take revenge on Alistair Krei, whom he blames for the supposed death of his daughter Abigail Callaghan. He is Hiro Hamada and Baymax's former arch-nemesis.

10 months ago
Score -3 You
Big Hero 6 is just a average movie in general, The Lego Movie Could have won the Oscar instead.
Permalink
You are ignoring the author of this comment
Show comment | Manage ignore list

9 months ago
Score 4
Now let's see who this masked man really is! (unmaskes the criminal) Robert Callaghan?
Permalink
You are ignoring the author of this comment
Show comment | Manage ignore list

2 months ago
Score 1
Robert Callaghan: Yes, it was me. And I would have gotten away with it too if it haven't been for you meddling kids.
Permalink
You are ignoring the author of this comment
Show comment | Manage ignore list

6 months ago
Score 3
I thought he seemed fine as villain, I mean I get the flaws.
Permalink
You are ignoring the author of this comment
Show comment | Manage ignore list

14 days ago
Score 0
I honestly enjoyed the movie, but I agree it has flaws like Callaghan is a weak villain.
Permalink
Retrieved from "https://loathsomecharacters.miraheze.org/w/index.php?title=Yokai_(Big_Hero_6)&oldid=37071"
Categories:
Cookies help us deliver our services. By using our services, you agree to our use of cookies.