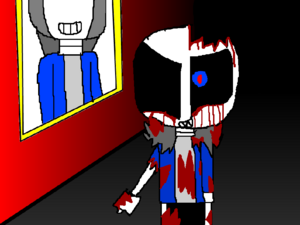 Note: This is a sandbox of a character of my Scratch account and roleplay account. None of this is canon material. Apologies if this breaks any rules and/or goes by the Forbidden Pages. This page will NOT be official and just a practice page. If you want this to be a candidate for deletion, that's perfectly fine. Thank you for understanding!

Pasta!Verse (P!V for short) Horrortale/Horror!Sans is an Au Sans in ii_icecreamgoat's scratch Undertale Au Pasta!Verse. He's one of the many antagonists of the Au. He is known to be one of the Bad Guys Infected!Sans took from Nightmare's evil gang and originally made into a lamp for his base, but after Terrorberry's transformation got out of hand, he was made into a clone.

Retrieved from "https://loathsomecharacters.miraheze.org/w/index.php?title=User:TheFlyingBirdwingxx/sandbox&oldid=28651"
Categories:
Cookies help us deliver our services. By using our services, you agree to our use of cookies.