From Loathsome Characters Wiki
< User:Yūki(Redirected from User:Yūki/sandbox)
Jump to navigation Jump to search 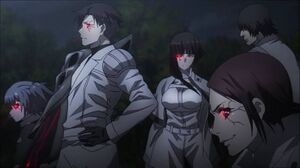 Those three on the right.

The Quinx Squad (クインクス班, Kuinkusu-han) or Qs Squad is a squad affiliated to Mado Squad that consists entirely of Quinx. The Quinx members are referred to as humans with built-in quinque in their bodies, drawing a distinction between them and normal one-eyed ghouls. The members are regarded as human research subjects who have undergone the surgical procedure developed by Dr. Kouitsu Chigyou. The tasks assigned to the Quinx were often monitored and overseen by Haise Sasaki until he resigned as their mentor. They all currently reside in a house called The Chateau, located in the 1st ward.

Retrieved from "https://loathsomecharacters.miraheze.org/w/index.php?title=User:Yūki/sandbox&oldid=26018"
Categories:
Cookies help us deliver our services. By using our services, you agree to our use of cookies.