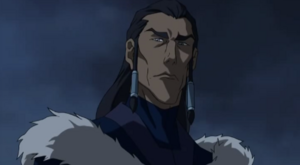 A dork avatar is what he is.

Unalaq is a major antagonist in The Legend of Korra, appearing as the secondary antagonist of Book 2: Spirits (with the main villain being Vaatu) and a posthumous antagonist in Book 3: Change.

Unalaq is Korra's uncle and second archenemy, the younger brother of Tonraq (Korra's father) and the father of the twins Desna and Eska. Though he initially seemed to be a well-meaning individual who offers to train Avatar Korra in the ways of the Spirits, his villainous side was revealed when it is learned that he was the one responsible for the banishment of Tonraq from the Northern Water Tribe.

Retrieved from "https://loathsomecharacters.miraheze.org/w/index.php?title=Unalaq&oldid=31456"
Categories:
Cookies help us deliver our services. By using our services, you agree to our use of cookies.