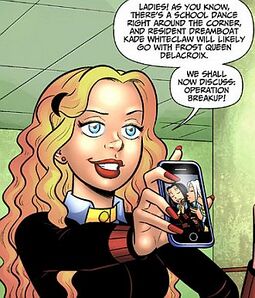 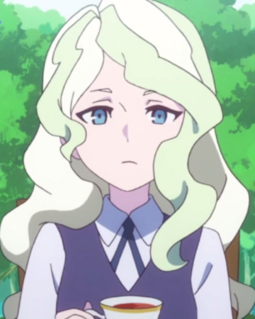 A good, well-written example of a mean popular girl character 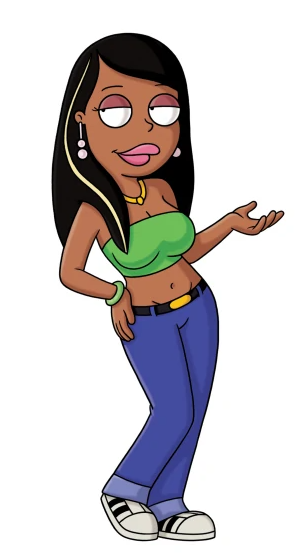 A notable example of a mean popular girl who acts like an a-hole towards others she doesn't like at all.

The mean popular girl (also known as the "alpha bitch" or "Queen Bee") is a stock character in most TV shows or movies or video games that usually take place in a high school setting. They're often portrayed as a teenage girl who is popular among the school but is often mean and prissy to less popular girls, mostly towards the main female protagonist. She is usually very attractive and often has sidekicks following her everywhere.

Male variants of that cliché also exist too where they're called the mean popular boy (also known as the "alpha bastard").

Tsundere characters are also part of the range from the cold "silent treatment" to the hotheaded "kindergartener who pushes you into the sandbox." The reasons behind a tsundere's behavior vary widely, but usually boil down to the conflict between their feelings of affection towards a love interest, and their reaction to having those feelings. Though in most examples the reason has something to do with a Madonna-Whore Complex or at least a fear of Slut-Shaming. Truth in Television for many teenage girls: as they both try too hard to be attractive and also try to look like they aren't trying. In an adult though, this type of behavior is generally seen as distastefully immature. The tsun ツン in the Japanese word tsundere ツンデレ comes from the word tsuntsun つんつん, which is a mimetic word for "irritable" or "grumpy," meaning someone is tsuntsun when they become hard to approach and to talk with.

People can be tsuntsun just for a while, one isn't necessarily always tsuntsun. It's like being happy or sad. Also, being tsuntsun is completely different from being tsundere. Someone who is tsuntsun is just grumpy, tsuntsun has nothing to do with romance cliches.

That means tsundere ツンデレ is actually short for tsuntsun deredere as two abbreviations in one.

The term was originally used to describe characters who began with a harsh outgoing personality, but slowly revealed a soft and vulnerable interior over time, which made this a plot trope as much as it is a character trope. Over the years the character archetype has become flanderized, and is now generically associated with a character who flips between the two emotional states at the slightest provocation, and usually at a specific person rather than a general sociability problem. The former is usually referred as Classic Tsundere and the latter as Modern Tsundere. A Tsundere, especially a classic one, is usually a Tomboy with a Girly Streak.

The tsuntsun can range from the cold "silent treatment" to the hotheaded "kindergartner who pushes you into the sandbox." The reasons behind a tsundere's behavior vary widely, but usually boil down to the conflict between their feelings of affection towards a love interest, and their reaction to having those feelings.

A himedere also refers to a character who wishes to be treated like a princess by the person she loves, even if she is not actual royalty. This word is an abbreviation of "hime" (), which means "princess", and "deredere" (デレデレ), which means "lovey-dovey". A himedere can be truly befriended by the few who can see past their ego. Sometimes the himedere takes their companions for granted and chooses to treat them unfairly. Those who tolerate her either let the himedere walk all over them or retaliate eventually, but there is usually a sense of loyalty or a strong bond that is difficult to break.

This type of character is one who has traits of a stereotypical, snooty princess, and comes off at first as arrogant, self-centered, and vain. Still, they have the capacity for love and friendship and often will soften over time, learning a valuable lesson in the process.

Himedere characters are very similar to tsundere characters and have a similar personality. They will both be arrogant and insult their love interest, acting like they're not interested when they actually care about them. The difference between the two is how himedere characters have a princess and superior complex, acting sometimes like a diva and very demanding to other people.

There is also a male version of this dere called oujidere, which is exactly the same but with a prince complex instead.

Himedere character's behavior is like a spoiled brat but with a princess complex. The kinder and more mature version of this dere are oujodere characters, who act like a gentle, kind and fair princess and don't demand others to treat them differently if they really are royalty.

Why This Cliché Sucks