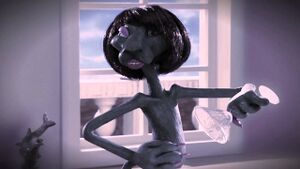 "I can finally get some privacy from those losers."

Minou is a Jamaican panther who happens to be a model. She is one of the 7 contestants from the stop motion animated series, Life's a Zoo.

The ONLY Redeeming Qualities


Retrieved from "https://loathsomecharacters.miraheze.org/w/index.php?title=Minou_(Life%27s_a_Zoo)&oldid=41280"
Categories:
Cookies help us deliver our services. By using our services, you agree to our use of cookies.