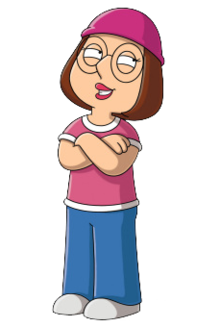 No one ever told me I mattered before.

Megan ‘Meg’ Harvey Oswald Griffin (born March 23rd, 1995) is one of the protagonists in the FOX animated TV series, Family Guy. She’s the daughter of Peter and Lois, and older sister to Chris and Stewie. She was a great character during the first 5 seasons, as well as right now after season 14. Unfortunately, during seasons 6-14, she was flanderized to being a punching bag.

She is voiced by Mila Kunis, who is well-known for her portrayal of Jackie Burkhart on the hit period sitcom show “That '70s Show”.


Retrieved from "https://loathsomecharacters.miraheze.org/w/index.php?title=Meg_Griffin_(Family_Guy_Seasons_6-14)&oldid=35071"
Categories:
Cookies help us deliver our services. By using our services, you agree to our use of cookies.