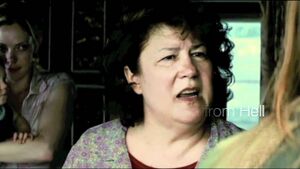 "People hear about what you do and they laugh at you..."

Margo Martindale is a minor character in the blockbuster movie Million Dollar BabyGMW, she is Maggie Martindale's selfish mother who cares about her own wellbeing.


Retrieved from "https://loathsomecharacters.miraheze.org/w/index.php?title=Margo_Martindale_(Million_Dollar_Baby)&oldid=29859"
Categories:
Cookies help us deliver our services. By using our services, you agree to our use of cookies.