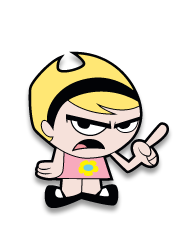 Mandy is one of the two title characters from The Grim Adventures of Billy & MandyBTSW and is voiced by Grey DeLisle. She along with Billy are the owners and best friends of the Grim Reaper. Unlike Billy's dimwitted, yet happy-go-lucky personality, Mandy displays a sinister, yet calmer personality.

Although Mandy is one of the “protagonists”, unfortunately, she was flanderized when seasons 5-6TTSW came out. Even in the crossover special with Codename: Kids Next DoorBTSW titled The Grim Adventures of the Kids Next DoorTTSW, her flanderization was never once redeemed and kept as is, thus, officially ruining her entire character.