lucky is the main protagonist of the 2010 Canadian-american animated series, "Pound Puppies".

He serves as the leader of the shelter 17 pound puppies, who's only goal to get every puppies or dogs to be with there new owners.

Despite being the main character of the series, he has his own flaws. 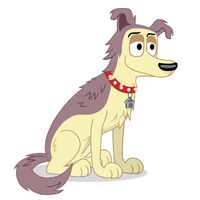 Retrieved from "https://loathsomecharacters.miraheze.org/w/index.php?title=Lucky&oldid=40352"
Categories:
Cookies help us deliver our services. By using our services, you agree to our use of cookies.