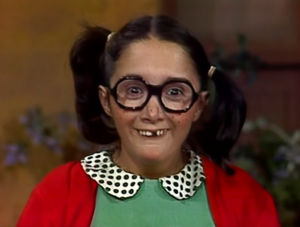 La Chilindrina (also known as Chiquinha) is one of the main characters in the Mexican live-action series El Chavo del Ocho, played by Maria Antonieta de las Nieves. The character had a small role in the original 1974-1992 live-action series, however, she was excluded in the 2006 animated series, being replaced by Ñoño. The character is known as the best friend of the main protagonist El Chavo and also the daughter of Don Ramón, she is characterized by being a short girl who wears glasses, pigtails and also by being mischievous and troublemaker.