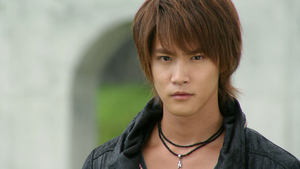 Haruto Soma (操真 晴人 Sōma Haruto), alternatively spelled Haruto Souma, is a former professional soccer player who became a victim of The Sabbath and held onto his inner Phantom from Kamen Rider Wizard

"He refuses to give up hope no matter how dire the situation."

That's actually a good trait for kids to emulate. Maybe the person who typed this is the type of person to give up easily in life.

"His catchphrase "Now, it's showtime!" is stolen from Beetlejuice."

Oh, so the catchphrase is trademarked by Beetlejuice now? By that logic, anybody who says "what were they thinking" should not be said unless you're the Angry Video Game Nerd. Who wrote this crap?
Permalink
Retrieved from "https://loathsomecharacters.miraheze.org/w/index.php?title=Haruto_Souma_(Kamen_Rider_Wizard)&oldid=37369"
Categories:
Cookies help us deliver our services. By using our services, you agree to our use of cookies.