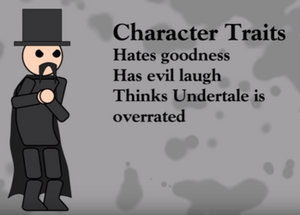 The Generic Doomsday Villain is an overpowering antagonist with no clear motive or plan behind their actions. They do not fancy themselves to be doing the right thing, they're not driven by envy, they have no personal vendetta against any of their victims, they're not being compelled in any way, they are not in it for the money or power, they're not seeking revenge for any real or imagined wrong done to them, they're not trying to satiate their excessive pride, they're not even a sadist who enjoys hurting people. They may have an objective, but they never have a coherent reason behind it. Essentially, a villain who is a flat character, defined solely by the threat they pose.

Important Note: Complete Monsters are required to have a personality and established motivations, therefore they can never be GDVs no matter how boring or poorly written they are, so don't add any CMs here.

Retrieved from "https://loathsomecharacters.miraheze.org/w/index.php?title=Generic_Doomsday_Villain&oldid=33522"
Cookies help us deliver our services. By using our services, you agree to our use of cookies.