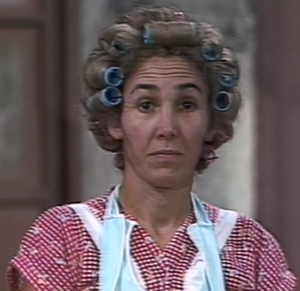 Come on Quico, do not join with that riffraff.

Doña Florinda (known as Mrs. Worthmore in the English dub of the animated series) is one of the main characters of the Mexican TV series El Chavo del Ocho, played by Florinda Meza. The character participated in all seasons of the classic series, the Chespirito series and the animated series. The character is a widowed middle-aged lady who is the overprotective mother of the spoiled and selfish boy Quico, being known for playing an antagonistic role in most episodes.

Retrieved from "https://loathsomecharacters.miraheze.org/w/index.php?title=Doña_Florinda&oldid=43777"
Categories:
Cookies help us deliver our services. By using our services, you agree to our use of cookies.