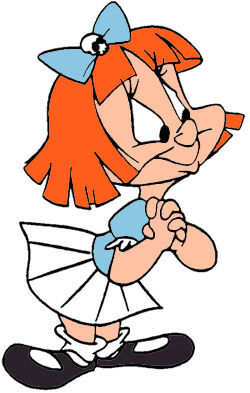 Elmyra Duff from Pinky, Elmyra, and the Brain, one of the prime examples of a Creator's Pet.

A Creator's Pet is a character that is hated by the fanbase of a particular work, but ends up taking up a lot of screen-time.

The criteria for being a Creator's Pet is that the character must be:

A) Hated by the fans

B) Loved by the production team

C) Shoehorned into a lot of scenes

D) The other characters constantly praise them, even when they don't deserve it.

A Creator's Pet is more often than not a Mary-Sue, that is to say, a self-insert who is highly unrealistic and has no flaws whatsoever. They can also be a Cousin Oliver, a kid who is inexplicably added to a work's roster to liven up an aging cast, named for Cousin Oliver from The Brady Bunch.

one day 16 hours 4 minutes ago
Score 0
You’re welcome.
Permalink
Retrieved from "https://loathsomecharacters.miraheze.org/w/index.php?title=Creator%27s_Pet&oldid=37079"
Categories:
Cookies help us deliver our services. By using our services, you agree to our use of cookies.