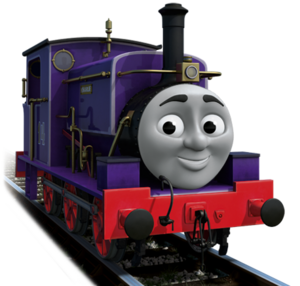 Charlie the purple tank engine is a character who appears in the Thomas and Friends franchise. He was introduced in season 13. He has received negative feedback from fans due to his unfunny jokes, annoying personality, and an overall poor attempt for humor made by HIT Entertainment.

Why He's Not Really Useful

Charlie has received very negative reviews of fans and critics of Thomas and Friends alike for his unfunny and stupid jokes, personality, occasional rude behavior, and overall awful attempts at humor. He is considered one of the contributing factors of the series first decline in quality and is also considered one of the worst characters in the franchise.