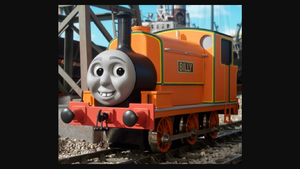 Another pointless one-off character made to sell toys.

Billy is a character that appeared in the episode "Don't Be Silly, Billy" Thomas and Friends. He is a orange tank engine that was brought by sir Topham Hatt to help with the work load on the island of sodor at the time. He is hated by fans and critics of Thomas and Friends for his rude behavior.

Retrieved from "https://loathsomecharacters.miraheze.org/w/index.php?title=Billy_(Thomas_%26_Friends)&oldid=45124"
Categories:
Cookies help us deliver our services. By using our services, you agree to our use of cookies.