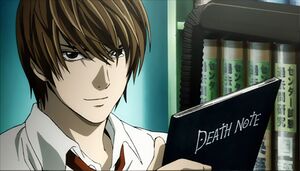 "I'm a hardworking honors student who's considered to be one of Japan's best and brightest. And I… I will become the God of this new world."

Upon discovering a notebook that can kill people known as the "Death Note", high school senior Light Yagami vowed to use its power to bring justice and peace to the world, but he went mad with power a while after using it, and gains a massive god complex to create a world of which he would rule as its god.

His murdering with the use of the "Death Note" has been noticed by the authorities and media, to which they dubbed him as "Kira". It also gained the attention of the worlds' greatest detectives L, Mello, and Near, as they vow to find out the identity of Kira, and bring him to justice.

one month ago
Score 0
Isn't the whole point is to watch the wannabe hero become the villain?
Permalink
You are ignoring the author of this comment
Show comment | Manage ignore list

one month ago
Score 0
This page has 7 good qualities, and only 6 bad qualities
Permalink
Retrieved from "https://loathsomecharacters.miraheze.org/w/index.php?title=Light_Yagami_(Death_Note)&oldid=39324"
Categories:
Cookies help us deliver our services. By using our services, you agree to our use of cookies.