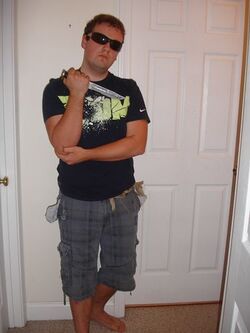 The world's most useless "Marine".

Jace William Connors (a.k.a ParkourDude91 or in his fantasies, Jack Stryker) is the main protagonist of the Deagle Nation video series, portrayed by the creator of the series, Jan Rankowski. In the series, he is a narcissistic, delusional, Islamophobic, vlogger/gamer who is addicted to weed and claims that he's a former US Marine. He's best described as a childish joke who spends all of his times fantasizing, playing FPS games and vlogging.

He's said to be a NEET who lives on his mother's income and his social welfare.


Retrieved from "https://loathsomecharacters.miraheze.org/w/index.php?title=Jace_Connors&oldid=40568"
Categories:
Cookies help us deliver our services. By using our services, you agree to our use of cookies.