Difference between revisions of "Flanderization" 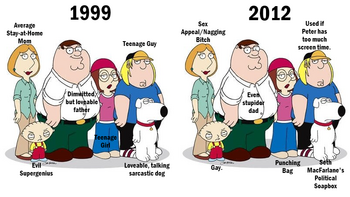 The same characters, but not the same as they were before :( 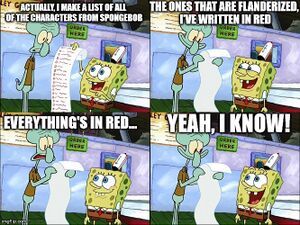 He is Kirby, but he's not the same in Kirby Squeak Squad 😔. He literally went on a rampage over a cake.

What happened to Tiny? She isn't Tiny anymore!

Flanderization or Out Of Character (OOC) (real element) is a trope that refers to the act of taking a single trait from a character and exaggerating and amplifying it more and more over time until it completely consumes the character. Most always, the trait/action becomes completely outlandish and it becomes their defining characteristic. Sitcoms and other comedy shows are usually the ones to suffer from this, due to the writers doing anything they can to get a cheap laugh from the audience, even if it means sacrificing a character's personality. Either there are out of character personalities that are counted as against the characters we know and love, or there are personalities that will make you have no choice but to lose all of the respect you had for the characters.

Flanderization is especially common amongst works where the creator is not involved, with their replacement not understanding the nuances of the characters and what made them so good in the first place, even if the lore was explained to them or had seen the series when the creator was involved. It is also extremely common in fanfiction for similar reasons no matter how devoted a fan is.

The Simpsons, being the series which spawned this trope's very name, has this almost across the board. Over time, the series has, in many ways, become a symbol of this trope in its purest form.

In the topic of flanderization, the American animated sitcom King of the Hill is a notable example of a series that used flanderization. This series is known for giving flatter characters new aspects, then focusing on them, thus creating the sense of flanderization at the same time as they get character development. E Flanderization is to not be confused with character derailment, in which it involves a character's trait(s) being vastly different compared to what was previously shown.

NOTE: If highlighted in green, it is positive flanderization.

The Amazing World of Gumball

The Wubbulous World of Dr. Seuss

The Overall Reason Why This Trope Sucks